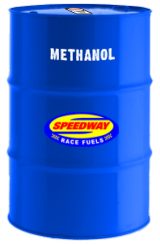 There are many other hydrocarbons besides gasoline that have been used as motor fuels. Besides the well known diesel fuel, alcohols are increasingly finding use in street machines as well as for racing. E85 is becoming more widely available at the pump and many new vehicles are designed to run on either E85 or gasoline, so-called “flex fuel” vehicles. And, of course, pump gasoline may contain up to 10% ethanol. This page will briefly discuss some of the technical aspects encountered when using the three alternative fuels listed below.

Methanol is also known as methyl alcohol. It is a colorless liquid with a distinctive odor. It is used in many industrial processes and as a component of windshield washer anti-freeze, dry-gas, and of course as a race fuel. As with other hydrocarbons, methanol burns in air forming CO2 and water. It is toxic when ingested and can cause blindness, kidney damage or even death.

Methanol has a number of advantages over gasoline as a racing fuel. The most significant is perhaps related to the high heat of vaporization, relative to gasoline. All liquids require heat to change from a liquid to a gas (evaporation). This heat comes for the surrounding air and therefore both gasoline and methanol cool the intake charge. However, methanol has a much higher heat of vaporization than gasoline (~3.8 times higher) and thus cools the mixture much more. Cooler air is denser and has less tendency to detonate than warmer and thus contributes to producing more horsepower. The effective octane of methanol is also much higher than unleaded gas, another advantage in high performance use. In addition, methanol has a much lower stoichiometric air:fuel ratio. A methanol engine uses ~2.3 times as much fuel as a gas engine. While the energy content per unit mass is much lower for methanol than gas, the greater amount used more than compensates and methanol makes more power than gasoline. On the average, methanol has an an ~5% power advantage over gasoline.

As a practical matter, there are a number of considerations to converting to methanol from gasoline. The most obvious is that for methanol the best power stoichiometric air fuel ratio is ~5:1 as compared to ~12.5:1 for gasoline. This means that the fuel system must deliver ~2.5 times more methanol compared to gas. At the least, this will mean a new fuel pump capable of moving 250% more fuel is needed. The pump and other fuel system components (including the regulator) must be chemically compatible with methanol. Larger fuel lines may be needed. When using a carburetor, rejetting is needed and with EFI, sufficiently large injectors must be installed. Volumes could be written on alcohol tuning, but the principles are the same as gas once the fuel volume is taken care of. One thing to keep in mind is that alcohol burn more slowly than gas, so more ignition advance is needed.

While somewhat biased in favor of ethanol, this page discusses some of the characteristics of ethanol.

E85 has some very interesting characteristics as a race fuel available at the pump or as a high performance street fuel. It has many of the performances advantages of M100 or E100 with easier starting and potentially much wider availability without the need to purchase and store large amounts of flammable, toxic material. The main technical consideration is that ~70% more volume is required when compared with gas. So components may still need replacement and tuning will, of course, be required. E85 is potentially very attractive as a fuel for street and street/strip supercharged vehicles where the heat of vaporization (midway between gas and methanol) is especially important as a means to cool the intake charge.