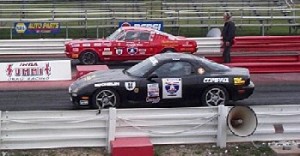 New to drag racing? We all were once, so if you want to know how to act at the strip and not make a spectacle of yourself, read on to learn the ins and outs of drag strip etiquette. Based on our years of experience, we bring you these tips.


After entering the track, paying your entry fee, and finding a place to pit you are ready to have your car “teched”. Tech inspection is usually fairly casual if you are running a stock type car, but you should be familiar with the rules that are used at your local track. Tracks generally follow either IHRA or NHRA rules, which are quite similar. Purchase a rule book on-line for ~$10 and read it carefully. Even though the rules may not require it for the speeds a newcomer will be running (slower than 13.99sec usually), Kennedy’s advises that you wear a Snell approved helmet at a minimum. Jeans, a T-shirt, shoes and socks are the minimum clothing items that you should wear. Even in slower stock cars, shorts and bare feet are prohibited. Seat belts with a shoulder harness are obviously also required. Cars running faster than 13.99sec may be required to have a driveshaft loop, though in a stock vehicle they will probably let you race anyway. Faster than 11.99sec requires a lot more equipment (such as a roll bar), but you won’t be going that fast in a stock or near stock vehicle, so don’t worry about it yet.

Assuming you have the required equipment, tech should be no problem. Listen to the announcements to tell you where to report for tech. Or ask a track official. At many tracks they will tech you in the staging lanes. The tech inspector will need your tech card, so have it filled out and ready. After you pass tech, the inspector will write your car number on your driver’s side window and windshield with shoe polish so it will be visible to the tower and track officials. At some tracks you can write the numbers yourself and the inspector will place a mark of some sort indicating you have passed tech. Just watch what’s going on or ask a more experienced competitor or track official if you are unsure. If you tell people you are “newbie” they will almost always be glad to help. Drag racing tends to be informal and friendly, even at the professional level. So among your fellow “Sportsman” racers you can expect a lot of help if you need it.

At some point, racing will start. Listen for the announcements and go to the correct lane for your class when it is called. Once you are in the lanes, stay with your car even when nothing appears to be happening. Once the lane starts to move, it may move quickly and you don’t want to hold up a whole line while you fiddle with your belts or return to your car. Watch the track officials, do not move until they motion you forward. Even when you are cleared to move, keep a sharp eye out for people walking around the lanes or for other vehicles. You should keep your AC off in the staging lanes, it will drip water that will get on tires and ruin traction. Your windows should be closed and parking lights on (if it is nighttime) as you approach the starting line.

As you approach the starting area, you will reach the “water box”, a slightly depressed area of pavement that is kept wet by track officials. If you have street tires, drive around the water. You may back up a little to straighten the car out and get your rear tires onto the damp area just past the water box. If you drive through the water, your tread will spread the water into the starting area and other competitors will hate you for it! The water is there to allow cars with race tires to do a proper “burn out”. Street tired cars should not do a big smoky burnout. The rubber in street tires is designed to operate best at typical ambient temperatures. The tires get slipperier, not stickier, when they get too hot. Just wait for the official to give you the signal to advance to the starting line. At that point, just briefly spin the tires while you accelerate out of the damp area and pull up to the lights. If your car is an automatic, hold the brakes on while you press down on the accelerator and your wheels should spin when you release the brake. For a stick shift, just bring the revs up and “pop” the clutch to get your wheels to spin for a few revolutions.

The start of a drag race is controlled by the “Christmas tree”, often called just the “tree”. It has multicolored starting lights and the name comes from these. On each competitors side are seven lights: two small yellow lights at the top of the fixture, followed in descending order by three larger yellow lights, then a green and a red bulb. Two light beams cross the starting-line area and are wired to the Christmas tree and electronic timers. When the front tires of a vehicle break the first light beam, called the pre-stage beam, the top yellow light (pre-stage light) illuminates and indicates that the car is approximately seven inches from the starting line.

Rolling further forward into the stage beam causes the second yellow light (the stage light) to illuminate, indicating that the vehicle is ready to race. When both vehicles are staged, the starter will activate the tree, and each driver will focus on the three large amber lights on his side of the tree. The three large yellow light will illuminate consecutively 0.500sec (1/2 second) apart, followed in 0.500sec by the green light. This sequence of lights is called a “full tree”. There is also a “pro tree” in which all three yellow lights illuminate for 0.400sec. As a newcomer you will want a full tree. 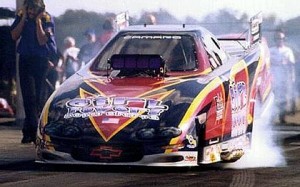 As you approach the starting line, watch the starter and the “tree” as you creep forward. When the top yellow light illuminates, you are “pre-staged”. If you are first to the line, wait for the other car to pre-stage before you “stage”. To stage, advance just a little further until the second yellow comes on. If you go too far, first the top and then the second light will go out. If that happens, back up past the line and creep forward again until both lights are illuminated. You are not yet ready for the controversial technique of “deep staging” where up pull far enough forward to extinguish the first light but still leave the second light illuminated. After both cars have staged, the tree will start. Each of the  three main yellow lights will come on in succession 0.5sec apart. You should launch when the last yellow illuminates, the green light will illuminate 0.5sec later and you need to anticipate this to get close to the perfect 0.500sec reaction time. If your reaction time is less than 0.500sec you have “red lighted”. You  can still make your pass for testing purposes, but you have lost the race unless your competitor red lights first!

The goal is to get to the end of track as soon as possible. Sounds simple, right? Just keep your foot buried in the throttle. But there are a number of pitfalls. The most important is to stay safe. To this end, stay in your own lane and if something seems wrong, get out of the throttle. If something breaks, your car may be leaking oil or other fluids. In that case, put on the brakes, stop immediately, and pull over to the edge of the lane to avoid oiling down the track.

When you pass the finish line, start slowing down immediately. If you are in the right lane, and the track turn off’s are on the left, then the other car has the right of way. If the turn off in on your side, you have the right of way. In any case, do not turn in front of another car! Wait for them to go past you, even though you reached the finish line first. Proceed up the return road, and stop to get your ET slip at the timing stand. Drive slowly on the return road and in the pits, there are kids, other people, and cars moving around.

Once you catch the “racing bug” and decide you want to go faster, call Kennedy’s. We can make your car a winner, the driving is up to you!

We are often at our local 1/4 mile track Empire Dragway in Leicester NY, which is an excellent facility. Come visit us and say hello, we will be glad to help as will the friendly track staff.