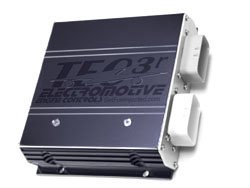 The venerable TEC³R has been revisited

One controller for all applications – no longer are there two variants, but both configuration options of the TEC³ std and 6/12 have been combined in the new TEC³r. New configurable Injector Outputs allow either one or two high performance low impedance injectors to be used on each of the 8 injector drivers. The new starting circuitry from the XDI has also been incorporated.

The TEC combines state-of-the-art fuel injection with the industry leading Direct Ignition System, replacing the existing carburetor or fuel injection system, ignition, distributor and coil. The use of advanced, digital computer based technology offers the absolute best power delivery, smoothest drivability and lowest emissions possible. Unlike any other fuel control system, TEC needs only two inputs to establish the base fuel curve. Where other systems rely on huge tables that must be filled with individual pulse width values, TEC is based on thermodynamically linear fuel delivery. You get up and running quicker with greater flexibility and better results than any other system available.

The new TEC³r represents the current in state-of-the-art fuel injection and direct ignition control integrated into one revolutionary package. The TEC³r is a PC-programmable engine control system featuring a powerful Windows-based tuning environment. Converting from carburetion to fuel injection has never been easier than with the TEC³r. Whether you choose to run throttle body injection, multi-port, or individual throttle bodies, the TEC³r will provide you with the ability to tune your engine to its peak capabilities.

Street enthusiasts will enjoy the benefits of a ‘distributorless’ ignition system that not only is infinitely adjustable, accurate, and powerful, but also gives you improved firewall clearance and freedom from all those ignition amplification boxes that you used to run in the past. If you are running an aggressive profile camshaft, idle control has always proven to be problematic for lesser engine management systems, but not for the TEC³r. Within the WinTEC3 software resides our exclusive ‘TPS/MAP Idle Blend’ table. With a few clicks of the keyboard, you will enjoy an idle quality that other engine management systems only dream of having.

For competition and ultra high output engines, the sophistication and power of the TEC³r system simply out-performs other production and aftermarket systems. With full control of the engine over all possible operating conditions, outputs that will control nitrous, boost, VTEC, and other devices, new rev-limiters with ‘Triple Smooth’ technology, and On-Board Data Acquisition, the TEC³r gives you Total Engine Control…and makes the competition green with envy!

The TEC³r Engine Control Unit
The new TEC³r ECU incorporates the winning features of our previous TEC2 and TEC3 system while adding an abundance of new features and a powerful new processing platform. Electronic Fuel Injection (EFI) control and patented digital Direct Ignition control is standard hardware for every TEC3r. The anodized, laser-etched ECU with waterproof OEM style connectors and harness may be mounted under the hood or in the passenger compartment and will activate separate multi-coil DFU’s (Direct Fire Units) mounted adjacent to (or on) the engine.

Standard features built in to the TEC³r:

The TEC³r Engine Management System will run the following configurations:

Current WinTEC³ software version is 3.4.1 and includes a firmware upgrade [get it here]

WinTEC version 3.4.1 has been released. This software update is for all TEC³ systems, whether they are TEC³ standard, TEC³ 6/12 or the new TEC³r systems. When upgrading to new Firmware, it is very important to verify your calibration file has been converted properly.Electromotive’s web site has detailed information.

This season, we are running one of our shop bracket cars with a Tech3r running alcohol. The motor is a big block Chevy that formerly used a traditional carb/distributor/MSD setup. On the dyno, the new setup made ~50 more hp and torque with more power throughout the rev range. It starts and drives like a street car in spite of the alcohol fuel, big cam, and 14:1 compression ratio. The car runs a consistent 0.2 seconds quicker and 4-5mph faster in the 1/4 mile.