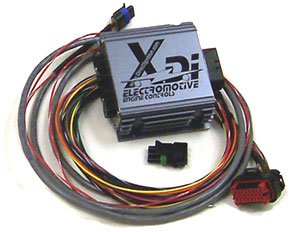 Kennedy’s is now proud to offer an all new approach to the tried and true direct ignition circuit pioneered by Electromotive. The XDi is a distributor-less ignition system designed for those running carbureted and mechanically fuel injected engines. What the XDi does is replace the CD ignition, distributor and coil. The regular XDi allows you to program an advance curve using dials on the ignition box. No PC is needed for programming. Vacuum/boost retard/advance can be used and an external retard control is also available. The XDi2 adds the ability to program a complex timing curve using a PC with the included software and cable.

Why is XDi superior to a conventional ignition system? The conventional system consists of an analog or digital CD ignition box, distributor, and coil. The XDi is comprised of a controller, wiring harness, magnetic crank trigger and coil packs (one coil per two cylinders). The cost is comparable but the XDi is far superior. Unlike Capacitive Discharge systems that only put out one very short spark, the XDI puts out a full energy, long burning spark at the highest and most critical engine speeds. Long burn times assure effective burning of all fuel mixtures including alcohol, nitrous, or exotic fuels under all conditions including very high boost (>50spi).

What are the advantages and operational characteristics of the XDi?

What comprises the XDi system?

With the release of the new XDI 2, Electromotive brings the PC programmability of its Total Engine Control systems to the XDI platform. Now our Carbureted and Mechanically Injected customers can benefit from the same ignition tuning features as our EFI customers without the costs associated with a full engine control system.

The XDI 2 incorporates all the advanced ignition circuitry of the XDI, but gives the user fully 3D Load and RPM based ignition tables to create the perfect timing map for any engine configuration. Also incorporated in the software package are fully programmable primary and auxiliary rev limiters, programmable general purpose inputs and outputs, knock sensor input and Electromotive’s unique programmable launch control system. The XDI represents the latest in Electromotive?s expanding line of high resolution multi coil ignition systems. As with all Electromotive’s current programmable products, the firmware and software are always upgradeable at no charge to the customer as new features are added.

The Drag Box allows you to supplement your Electromotive Ignition or Fuel System with this Rev-Limiter / Window Switch and Multi-Retard expansion panel. This panel is of standard single DIN radio size and will allow you to consolidate a number of functions normally controlled by several boxes into one easy to navigate unit.