An Introduction to Electronic Fuel Injection

Electronic fuel injection (EFI) is simple, in theory. The design goal for an EFI system is to deliver the correct air fuel ratio for varying load, speed and temperature. Most modern EFI systems are incorporated in an ECU which also controls the ignition system, and may control may other functions such as anti-lock brakes, traction control systems, the transmission, etc. A fuel injection system itself consists of a source of pressurized fuel, fuel injectors and the electronic controller. The fuel system is composed of the fuel tank, a high pressure pump, and some method for regulating fuel pressure. The injectors can be though of as electrically operated valves. The amount of fuel delivered to the engine is determined by size of the injectors, the amount of time that the injectors are open, and on the fuel pressure. The electronic controller to determines how much fuel is needed and commands the injectors to remain open for the necessary amount of time to deliver the needed fuel volume. The amount of time that the injector is open is called the pulse width and is usually expressed in milliseconds (one thousandths of a second). 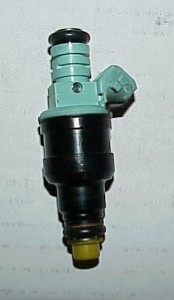 Electronic fuel injection has come into its’ own in the last 10-15 years for the same underlying reason as most of the other amazing technological changes – the development of the microchip. The microchip allows the engine control unit (ECU) to make the necessary calculations to determine how much fuel is needed. A lot of computing power is required to do this. The Electromotive TEC3, one of our favorite aftermarket ECU’s, can make more calculations per second than the desktop computers of just a decade ago. Once these computations are accomplished, relatively simple circuitry is used to open and close the injectors for the requisite time.

The fuel requirements of an engine are determined by the displacement, rpm, load, and inherent engine efficiency. In order to operate effectively, the ECU needs inputs that represent these variables. Depending on the design, the minimum inputs required include the sensors listed below.

A simple EFI system can operate fairly effective with just these three inputs. However, many systems include additional inputs from the following types of sensors. Most sensors are of one of two types. Some are simple on-off switches or counters, such as a gear indicator or tachometer. Most measure continuous variables like temperature or airflow. These sensors produce a 0-5v output. This signal is read by the ECU (computer). By referring to a calibration table, the ECU translates the signal into a value representing the physical parameter which is being measured, such as airflow in units of mass/time or temperature. The tuning process boils down in most cases to changing the values in these tables. 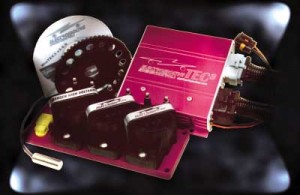 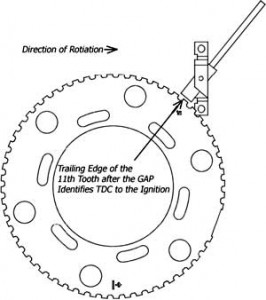 Using a combination of sensors, the ECU can compensate for a very wide variety of operational conditions including extremes of temperature, altitude, fuel octane, vehicle speed, etc.

To learn more about EFI, please see the next in this series “Electronic Fuel Injection – further Operational Features“.