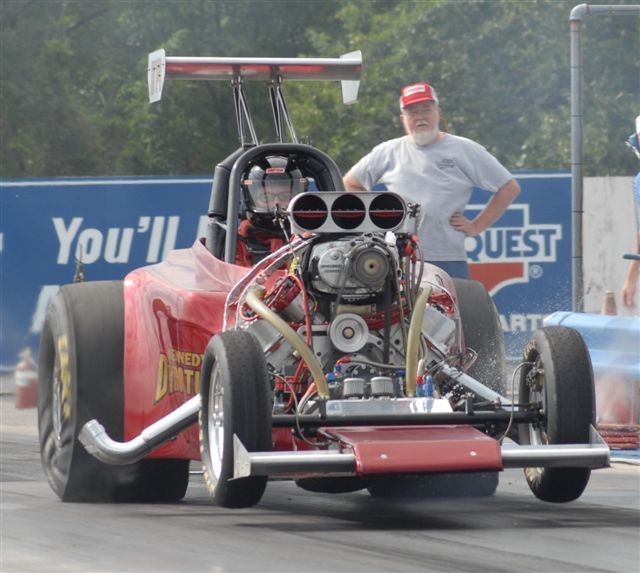 Sean Kennedy (proprietor of Kennedy Exclusives) makes a pass at New York International
In the background, Bob Kennedy keeps an eye on the launch.

At Kennedy’s we are serious about performance. In the picture above you can see our race car. The Kennedy’s Dynotune race car is a supercharged alcohol fueled Hemi altered that we run locally in Quick 8 and Quick 16 events and at Nostalgia races. Bob Kennedy built the car. The chassis is from S&W Racecars. Bob’s son Sean Kennedy is the driver. Sean is the owner of his own custom graphics and painting business – Kennedy Exclusives. The stunning paint job is Sean’s work. Joe Zito and Jerry Malczewski help out with crew and wrench duties and Rich Krause helps with on board data acquisition. The car runs the quarter mile in less than seven seconds at over 200mph! We posted a 6.71 second ET at over 204mph. We can make a car like this run, so you can be confident in the work we do for you!

2016 Update – This has been an exciting year as we continue to improve the car. Our HP numbers are creeping up with only 22lbs of boost. When we get the fuel system dialed in we expect to add more boost to the 35-40lb range. In the video below we were running some tests in the 1/8th mile. This particular pass was a respectable 4.4 seconds.