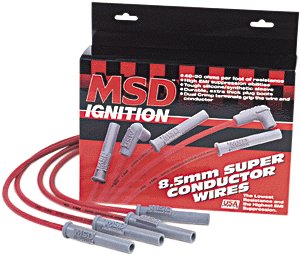 When a customer brings a car to our shop with a complaint of running poorly or a lower than expected number is seen on our chassis dyno, one of the first questions we ask is “how old are your plug wires?” Experience is the best teacher, and we have learned that a simple plug wire replacement/upgrade will often solve the problem. For all high performance vehicles, we recommend replacing wires every two to three years. For very hot street machines, race cars, and most cars with a high voltage ignition system (especially blower machines) they should be replaced yearly. A stock vehicle can use stock replacements, though as you will learn below even then you may want to upgrade to an aftermarket wire set. All other vehicles need high performance wires. You may be skeptical of this assertion and think this is just our attempt to sell you wires. After all, you don’t replace the other wiring in your car, or rip up the walls at home to replace wires on a schedule, do you? Some food for thought though: do these wires carry 25-50,000 volts? Do they operate in the harsh environment of an engine compartment? And so on. By reading below you may understand our recommendation a little better.

Spark plug wires consist of a core which conducts current and an outer layer of insulation. The insulation is usually a silicone rubber material. OEM wires use a core of carbon impregnated fiber. The conductor is bent over at the wire end and crimped to the plug connector. Carbon fiber is used as a core by OEM’s because it produces minimal RF noise. Unfortunately, simply due to the physics of electrical conduction high resistance to producing RF is correlated with  high resistance to current flow and thus reduced spark energy.

Some race application use wires with a solid metallic core of straight wire. These wires have very low resistance to current, but typically produce unacceptable amounts of RF. This RF noise causes interference in radios and can also produce problems with the electronics in the car such as the fuel injection system, ECU, ABS, gauges, etc. We once had a devil of a time trouble shooting a race car that wouldn’t “sixty foot” as fast as it should have. What was happening was that a single solid core wire being used was interfering with the solenoid in the air shifter assembly. The car was randomly shifting into high gear long before the programmed shift point!

The quality aftermarket wire we typically recommend use a helically wound solid metal core. This has the property of causing the wire to look inductive at high frequencies and minimize RF radiation while still having very low resistance to current. OEM’s don’t use these because they are more expensive, and carbon wires are “good enough” for the relatively low voltages

This drawing is a cross section of the typical high quality aftermarket wire (an MSD in this case). The innermost layer is a Kevlar core which is wrapped a ferrite material that suppresses RF. The third layer out is the conductor, which is a helically wound strand of copper. In turn, this is wrapped in a graphite RF suppressor. Next is a layer of silicon which is depicted as a thick white layer and serves as an insulator which is in turn wrapped in a fiberglass braid. The braid provides strength and protects the insulator. Finally, in black, is an outer silicon jacket. This protects the wire against chemical and physical damage.

The first thing to consider is resistance. Remember those carbon core OEM wires we told you about? They have great RF suppression and are inexpensive, which is great. But what goes along with that is high resistance to current flow. Just as a restrictive exhaust system robs power, wires with high resistance deliver less of the coil output to the plugs. OEM wires may have resistance as high as 5000 ohm/ft. Quality aftermarket wires will be as low as 50-100 ohms/ft.

Is lower resistance important? Well, as with many things, “it depends.” For a stock motor, the stock ignition system (including the wires) is nearly always perfectly adequate. This applies to OEM application within the last twenty years or so. Prior that, if you are driving a “classic” from the 50’s, 60’s or 70’s the whole ignition system may NOT be adequate, but you probably know this already. But with modern cars, IF they are stock, original wires will be fine IF they are in good condition. This brings up another point about carbon cores wires, they are fragile. The carbon conductor is easily damaged. If the conductor is fractured through and through, one cylinder will not fire and you will easily recognize that there is a problem. But more likely than that are partial breaks in the conductor. This will not cause a completely “dead hole”. But especially under load, the increased resistance which is a consequence of the fractured conductor, may cause hesitation, vibration, decreased fuel mileage, and worst of all – lower the horsepower. You can test for this with an ohmmeter, if you know the correct resistance. But for most people with a stock motor we recommend replacing the plug wires every 4-5 years with a quality aftermarket set.

Race cars and heavily modified street or street/strip cars are another matter altogether. This is because the one thing ALL performance mods have in common is that they increase cylinder pressure. By definition, for a given displacement, the only way to increase hp is to increase cylinder pressure (or rpm). And as cylinder pressure rises, it requires an increasing amount of current to generate a spark at the plug gap. In fact, the resistance the fuel/air mixture poses to sparking is directly proportional to the cylinder pressure. If, for example, you have installed a blower on your 250hp car and are now making 500hp, the cylinder pressures have approximately doubled and a spark that is approximately TWICE AS STRONG is now required. Ditto for nitrous. This leads to the phenomenon observed on blower or nitrous cars of “blowing out the spark”. What is happening is not the spark being blown out, but no spark (or a weak, late spark) being generated in the first place. This is seen on the dyno as a sudden drop off in power, typically in the 4-5,000rpm range. Or on the street as a sudden decrease in the rate of acceleration when running at WOT. In other words, cars running high compression, a blower, or nitrous need a stronger spark. This often requires not only better wires with lower resistance, but a stronger coil and an aftermarket CD ignition.

If you think this means you can simply replace your stock wires with a good aftermarket set and then forget them, this is incorrect. Wires will wear out and become damaged. Short of testing them periodically, we recommend that you replace them yearly on a high performance race vehicle. On a hot street or street/strip car, every two to three years is reasonable. Given the difficulty in accessing the plugs and wires on many modern street cars, we usually recommend changing the wires and plugs at the same time.

What Brand of Wires Should I Buy?

There are many brands available. It is a fact of life that plug wires are a very price sensitive product which are heavily promoted. The reality is that at a given price point, the different brands are very similar. Our recommendations are based on actual use of the product and we have found that the ACCEL, MSD, and Taylor brands all work and fit well. Each markets a number of different types. If you aren’t sure which you need contact us.