Kennedy’s Dynotune worked closely with Mopar enthusiast Dave Schultz to create what is arguably the best looking, best performing street Dodge Durango in existence. The project is not quite complete but has already seen over 600 rwhp on our dyno through a high stall converter. The car has been out to the track but hasn’t made a full pass – times will be posted soon. We will also post complete technical details later. In brief, the 413ci R3 block is fed by a Kennedy’s custom fabricated Procharger supercharger system with custom intercooler. It uses Indy cylinder heads, a 2000CFM throttle body and a Kennedy’s custom cam and is quite streetable with Kennedy’s custom tuning. The transmission is from Carl Rossler. In the meantime, pending more tech info here are some pictures. The custom paint is from Sean Kennedy’s “Kennedy Exclusives”.

The engine management and distributorless ignition system is a Kennedy’s installed and tuned Electromotive Tec3r. We are a dealer/distributor and installer for all Electromotive products and for ProCharger supercharger systems 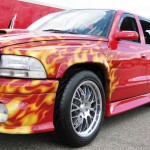 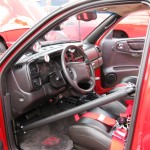 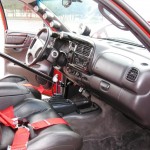 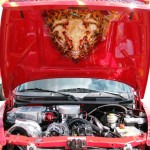