Very simplified, a torque converter (TC) has three major internal components. The turbine, stator, and impeller. They reside inside the case, which is filled with automatic transmission fluid. The crankshaft is connected to the case through the flexplate and the impeller is mounted to the case. When the crank turns the case and impeller rotates and generates fluid flow. The fluid flow is directed first against the turbine, which is coupled to the input shaft of the transmission. The force of the fluid flow causes the turbine to rotate. The fluid flows from the turbine to the stator (in the middle of the converter), which freely rotates in one direction due to a one way clutch. The stator (in the middle, between the impeller and the turbine) plays a role in directing the fluid so that it efficiently interacts with the impeller and the turbine. 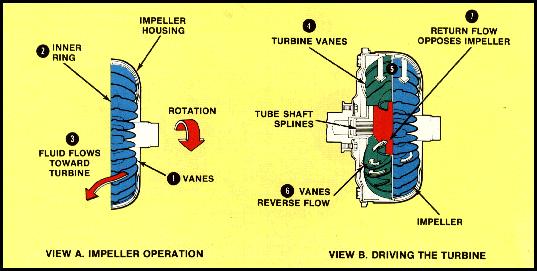 A race quality converter can be quite expensive. All of the parts including the case need to be strengthened to absorb the high loads. When a trans-brake is used, for example, the converter has to absorb the full power of the engine with the turbine locked. This generates enormous heat and pressure. Obviously, you need a good transmission cooler if you use a high stall converter.

Stall Speed and the “K” Factor
Stall refers to the maximum speed a the motor can achieve against the converter when the turbine is locked and prevented from rotating. The rpm achieved (stall speed) will be a function of the engine torque and the converter design. In general, the higher the stall, the less efficient the converter is at high speed. So why would you want a high stall converter? To allow the engine to get into the meat of the power band quicker. A converter optimized for drag racing will have a stall speed much higher than a street converter. Allowing the engine to get into the power band quickly more than compensates for the disadvantage of lower efficiency. On a street car, the penalty in gas mileage and heat generated by a high stall converter favors a lower stall. Also, a high stall can be annoying to drive on the street because it degrades throttle response. When you stab the gas, there is a delay while the engine revs before the car starts to accelerate. To illustrate how this works, there can be up to 0.5sec or more improvement in 1/4 miles times by switching to a high stall converter. The improvement all comes in the first part of the run, and interestingly, trap speeds may decrease due to the inefficiency of the higher stall converter at high speeds.

For a street/strip car, converter stall is a compromise. For example, a given combo may need a 4,500-5,000rpm stall for the best 1/4 mile times but be annoying on the street due to excessive “slippage” but a converter which stalls at 3,000-3,500 will allow tolerable street driving without too much effect on the 1/4 mile performance. Stock converters typically stall in the 1,500-2,000rpm range. Of course, what is tolerable to one person may not be to another and vice versa. To get a converter that stalls at the right speed for your application, you need to speak to the converter manufacturer. For best drag strip results, we like to see a converter that stalls close to peak torque. Some people advocate a bit above, others a bit below peak torque rpm. Again, close cooperation with the converter manufacturer is the best approach.

Labeling a converter as having a specific stall without reference to the motor it is behind is misleading and naive. That stock converter, which stalls at ~1,500rpm behind a stock motor, might stall at 3,000rpm or more behind a blown big block, if it didn’t blow up first! To elaborate a bit: stall speed is not just a function of the converter. It is also a function of engine torque. This can be relatively easily described by defining the “K” factor. K is simply the constant in the equation K = rpm/sqrt{torque}. The equation describes the observed behavior of the converter behind a specific engine. What this allows us to do is determine what the stall speed of a given converter will be if we put it behind a different engine.

For example, if a motor has 400 ft-lbs. of torque and stalls a particular converter at 3,000rpm, K = 3,000/sqrt{400} = 150. Since we know K = 150, we can predict the new stall speed if torque is increased to say 500 ft-lbs by rearranging the equation to rpm = K*sqrt{torque}. In this case, the new stall would be rpm = 150*sqrt{500} = 3350. This formula isn’t perfect. It won’t work if the engines have wildly different torque curve, for example. And it won’t tell if a particular converter will hold together under markedly increased torque. But it gives a decent ballpark estimate and serves to illustrate a basic aspect of torque converter function. For most street and street/strip, you probably want a stall in the 2,500-3,500rpm range. But do not buy an off the shelf converter thinking it will give you the advertised stall unless it has been proven to do so on an identical setup. Speak to the manufacturer first to be sure you are getting what you need for your particular combo.